My little maker built some great things out of recycled materials. I interviewed Sydney on her inspiration and design process.

Me: What did you make?

S: I made an organizer out of recycled materials because my supplies were not easily accessible and I also made an ear bud container because my ear buds always became tangled in my pencil case. 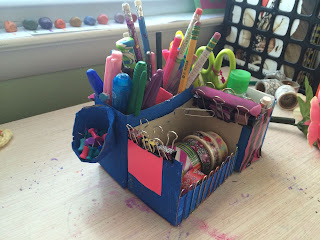 Me: Can you describe how you made the organizer and materials you used?

S: For the pencil and pen organizer I used three boxes. I painted all three boxes before I began assembly.  For the first box, I got an old Kashi bar container, cut the top off, and put another piece of cardboard to divide it into two equal sections.  Hot glue was my choice of adhesive. I have mastered hot glue.

For the second box, I used an old tea box, with the top cut off and glued it to the side of the Kashi box.

The final box, was also a tea box with the top cut off, but I cut the front side half way lower than the rest so it would provide easier access.

Me: Can you describe your ear bud holder.

S: I got two mason jar tops and put the lid in the band then got hot glue and put some around the inside not to touch the lid so it’s able to spin. I did this to two tops and rolled a piece of paper up and glued it so it wouldn’t unravel. I glued the rolled paper to the inside centers of the two lid. I let it dry for a few minuets. I decorated the tops and hot glued a piece of a chopstick so you could wind it up. Finally I made a hole in the piece of paper so the jack stays in place.

Me: I understand you went through a number of iterations before your final design. What did you learn  on each iteration?

S: Well my first model had a clasp so it could open up like clam. The problem was that it didn’t spin that well because it was getting stuck. This new design allows you to easily access the ear buds by  not having to open it like the first design. To access it you just pull on the ear buds and it unwinds. To roll it back up you use the chopstick on the side by twisting it and the ear buds roll up.

Me: That’s great. It sounds a lot like iterative/lean development where you build quickly test it out and then rebuild it again improving on the next design. So what are you going to do with these creations?

S: Well I might sell the ear bud holder and I gave one to my friend for their B-day. Also, I made two more desk organizers for my mom’s desks at her two schools.

Me: Any future creation plans?

This summer I took my family, my brother and wife, and my parents on an epic vacation to Las Vegas, Grand Canyon, Lake Powell, Bryce, and Zion. Follow along on how I planned a relatively Read more…

For our third writing assignment, Jason picks the topic “Drive”. In only our 3rd writing session, the kids are really enjoying getting together to write and share stories. This is turning into a great family Read more…