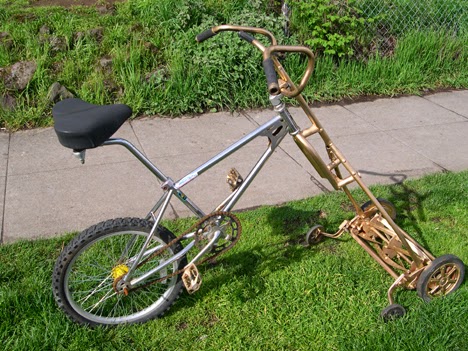 Now that I had this crazy idea to mow the lawn with my bike, where to begin? A quick search on the internet revealed that this concept inspired many other bike loving folks. Replace the front wheel with a reel mower and done! Many videos on the internet shows this design doing a great job at cutting the grass with clipping flying everywhere.

There were two problems with this design.
One. It was a unitasker.  Taken from Alton Brown’s, my favorite Food Network chef/scientist,  playbook-these devices were dedicated lawn care apparatuses. In addition to sacrificing a complete bike to make this work, you ended up with a dedicated machine that just mowed the lawn.  I tend to collect things* and the last thing I wanted was an unusable bike mower that would take up space and rust away.

Two. You couldn’t steer the contraption. Or at least you couldn’t steer it very well. A discussion among other bikers revealed the challenge using this design. With two wheels up front, if the turning axis wasn’t exactly perpendicular with the ground, one wheel would tend to rise up and the other wheel would drive itself down into the ground. I re-watched all the videos and these mowers never turn.  Certainly, one could get this design to work, but it would require a lot more engineering to have functional steering.

So I came up with my first design requirement.

I should be able to connect and disconnect the mower to any of my standard bikes with relative ease.

This made me think of a trailer. I’ve towed a bike trailer with 80-90 pounds of kiddo weight, so I knew it was a plausible feat.

Of course, people told me this wouldn’t work.  Not having any experience mowing with a reel mower, I had no idea how hard one had to push or how much traction the the wheels on the reel mower required to turn the blades.

Discussion and ideas flowed from front mount turning designs to a mid mount. While mounting in the middle could solve the steerability issue, there were a whole host of other problems that arose including pedal placement.  This recumbent trike design looks awesome, but in addition to being a unitasker, it looked super expensive to build and takes up way too much space.

In the past, I have typically kept quiet about my ideas and “worked” on them in secret. This often meant I would day dream and then think about it some more.  Realizing that socializing my plans  often lead to better ideas, I started talking about this concept to my non-biking group. And that’ when the first break through happen. At our bus stop, my neighbor mentioned I could have their old reel mower that they never used, as the  husband abandoned the practice since the mower was easily stopped by small branches or twigs. So I took their mower, but was troubled by the idea that a small branch or even worse-a twig, could jam up the mower.


We were coming out of a seriously cold and snowy East Coast winter, so I had to wait a few weeks before the grass was tall enough to try the mower. Surprisingly easier than I had expected, this was probably due to the sparsely grown grass. I renewed my confidence about a trailer design.

Two major events happened next. One, a fellow mountain biker, John Jacob, offered to help out with the project.  This was a huge victory because he has ninja welding and mechanical skills. Second, in my research of reel mowers,  I found the king of reel mowers: the Fiskar’s StaySharp Max Reel Mower. At that moment, I had visions of biking through open fields with grass clippings flying around.

If you haven’t checked out how the previous posts on the Canton Fair-look here: Traveling to the Canton Fair and here: Canton Fair First Impressions. This post is about myself and my brother’s journey on Read more…

Learning How to do a Wheelie on a Bike. How Tony Robbins is Making Me a Better Mountain Biker.